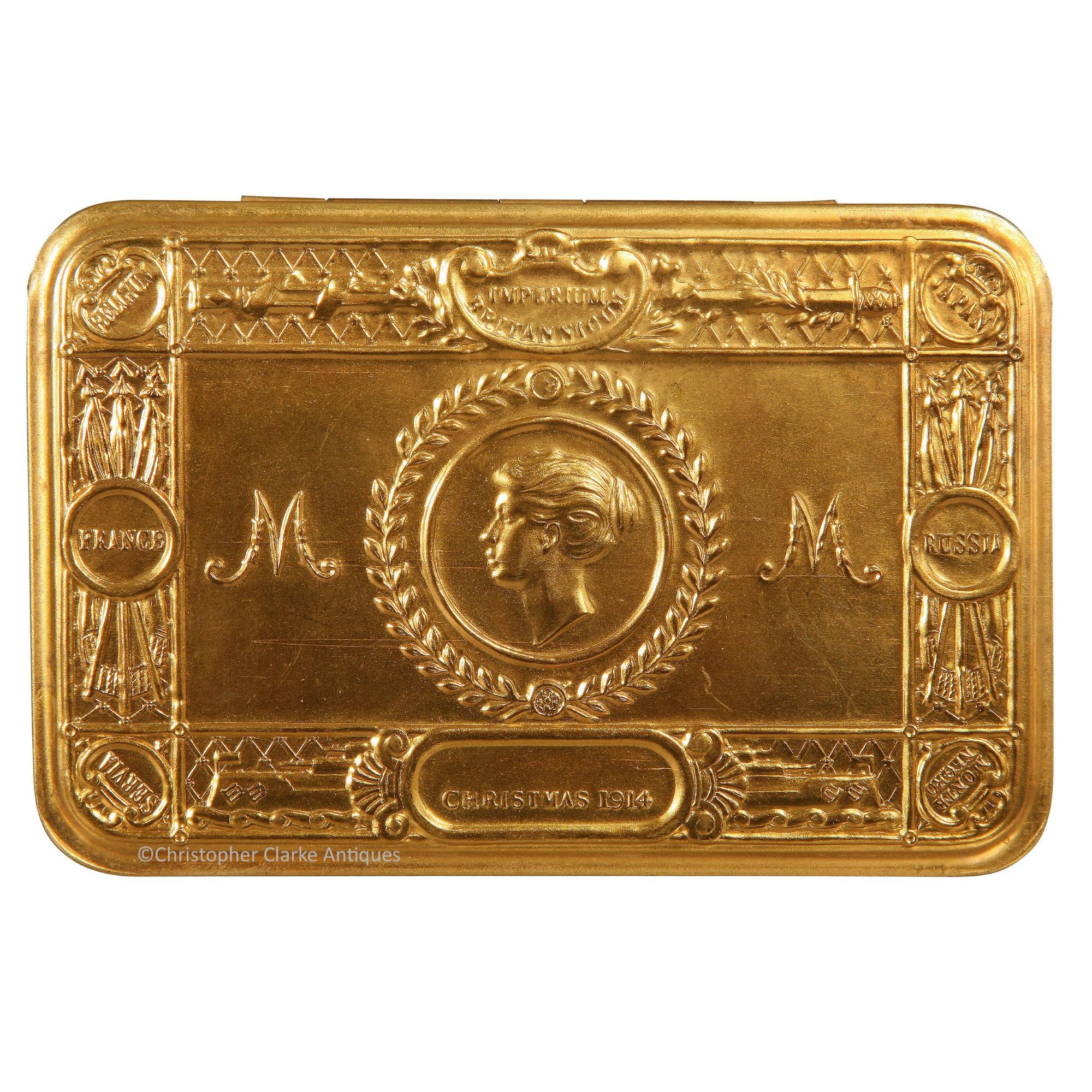 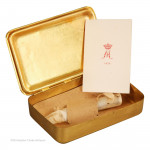 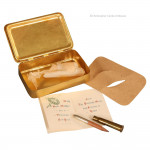 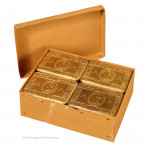 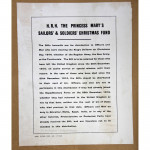 It is one of 12 that were packed inside a cardboard box, along with 5 other similar boxes that were all contained within a larger box. Although the larger box, containing a total of 72 tins, was packed, tied with string and fixed with a lead seal they were never issued. This box remained unopened for nearly 100 years. The larger box was finally opened by Lady Emma Kitchener, great grandniece of Lord Kitchener on the 28th of June 2014 at the Chalke Valley History Festival.

These boxes were from the second wave that were issued after Christmas. In January 1915 it was decided to use the surplus money to give this simplified gift to all British, Colonial and Indian troops both serving outside and inside the British Isles, who had not already received a Mary Box. The reasoning was due to the high numbers of British and Imperial forces, estimated at over 1,800,000, who had not received the gift in the first distribution but were now eligible.

The condition of these boxes is very good, as they have mostly remained unopened. The odd card has suffered some deterioration over time but we are happy to clarify the condition of each individual box before purchase. Each box is sold with a certificate noting the provenance an illustrating the opening of the larger box by Lady Emma. Dated New Year 1915 to the card and the tin dated 1914.

Please note that the box illustrated shows one of the 12 boxes and is not necessarily the one you will receive. We are happy to send photos of the box you will receive upon request.

The History of Princess Mary Boxes
At a meeting held in the Ritz Hotel, Piccadilly, London, on 14 October 1914, H.R.H. Princess Mary inaugurated a special fund to pay for the manufacture and distribution of her now well-known Christmas 1914 Gift Tin.

'For many weeks we have all been greatly concerned for the welfare of the Sailors and Soldiers who are gallantly fighting our battles by sea and land. Our first consideration has been to meet their more pressing needs, and I have delayed making known a wish that has long been in my heart for fear of encroaching on other funds, the claims of which have been more urgent. I want you all now to help me to send a Christmas present from the whole nation to every Sailor afloat and every Soldier at the front. On Christmas-eve when, like the shepherds of old, they keep their watch, doubtless their thoughts will turn to home and to the loved ones left behind, and perhaps, too, they will recall the days when as children themselves they were wont to hang out their stockings wondering what the morrow had in store. I am sure that we should all be the happier to feel that we had helped to send our little token of love and sympathy on Christmas morning, something that would be useful and of permanent value, and the making of which may be the means of providing employment in trades adversely affected by the war. Could there be anything more likely to hearten them in their struggle than a present received straight from home on Christmas day? Please, will you help me?'

A General Committee was formed after H.R.H. Princess Mary's letter to the public of the 15th of October 1914. With little time before Christmas, the Committee benefited from having such important people as the Prime Minister, Churchill, and Kitchener as members. Added to them were representatives drawn from Parliament and the Commonwealth. Adshead & Ramsey designed the tin with a bust of the Princess within a laurel wreath to the centre and 'Imperium Britannicum' above. The tin also had Mary's initial either side of the bust and the Allied powers, Belgium, Japan, Russia, Monte Negro, Servia and France around the edge. 'Christmas 1914' was embossed underneath the laurel wreath. It was decided to suit the contents to the recipient. Most contained a pipe with tobacco and cigarettes but nurses received chocolate, Indian troops spices or candy and non-smokers acid tablets. All of the boxes had a card from the Princess and most also had a bullet pencil. Such was the public's reaction to the appeal that 2,600,000 tins were able to be distributed by the War Office, Admiralty, Colonial Office, India Office and the High Commissions of the Colonies. To illustrate the huge task of organising this, more than 13 million cigarettes, 710,000 pipes and 44,000lbs. of tobacco were purchased. Some problems naturally ensued with the production of the brass tins affected by the manufacture of armaments and the difficulty of buying ceric stones from Austria for the lighters when they ran out. Given the fact that it would be very difficult to fit all of the contents listed above into the tin and historical notes that state that the individual gifts were contained in a larger cardboard box, and the logistics of supply and the preferences of the recipients, many of the items were added at a point closer to individual distribution. Despite the powerful Committee a number of the boxes weren't received in time for Christmas 1914, which is hardly surprising. However, with plenty of money in the fund those eligible to receive the gift was extended to include all men and women in uniform on the 25th of December 1914. Some were still being issued 5 years later in 1919 and the quality of the later boxes is markedly different. The Princess Mary Boxes have become an iconic item from the Great War. A simple gift to remind those at the front that they were remembered by those at home meant so much to so many. The majority that come on the market are incomplete or damaged. Naturally those that are in good condition, or an earlier issue, are more desirable.

A Militia Meeting by Bunbury