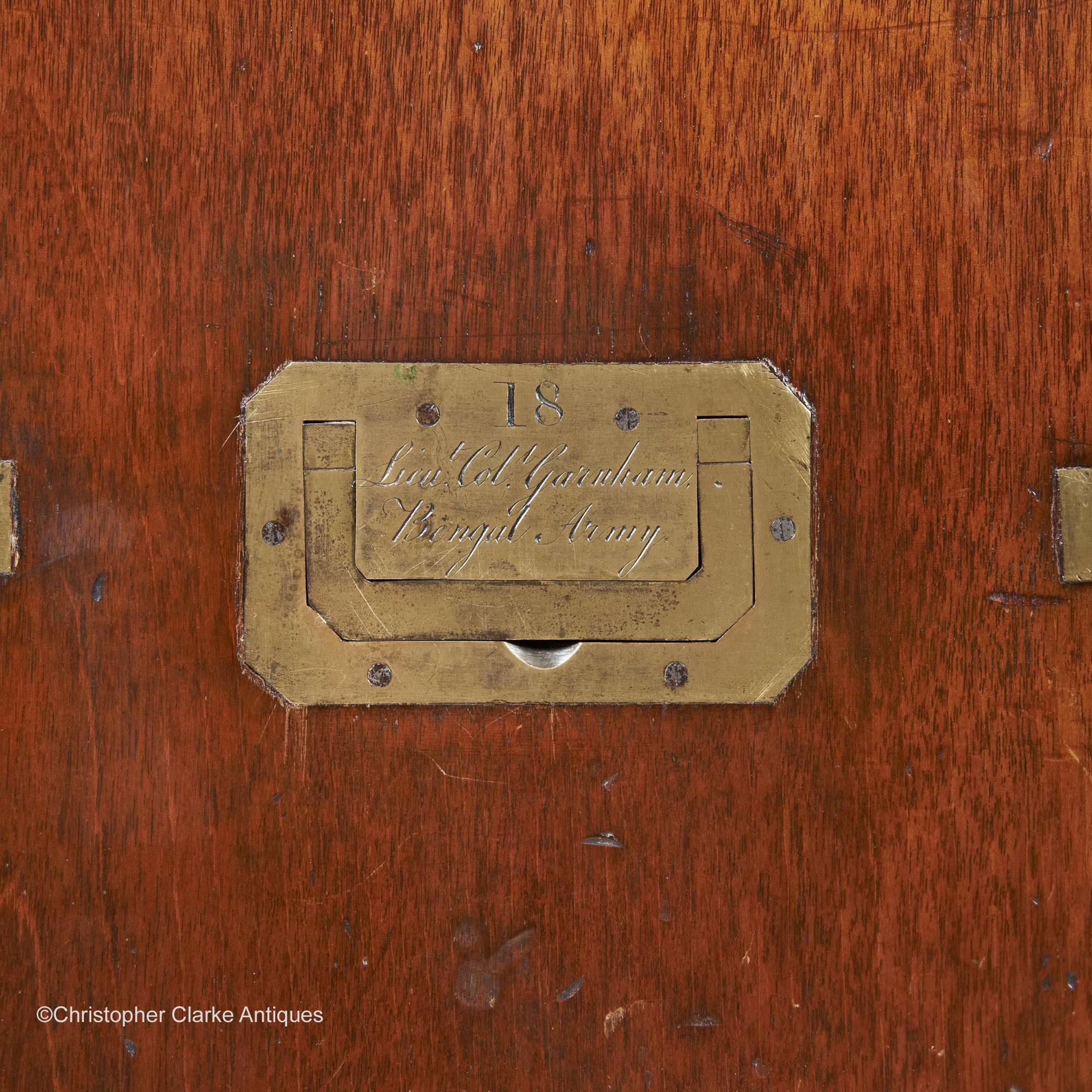 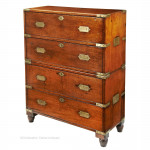 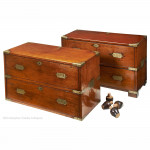 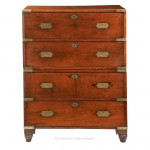 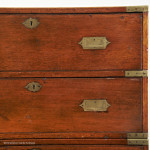 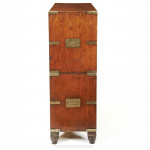 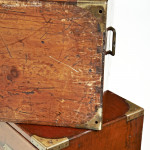 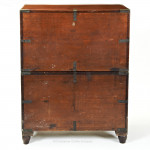 This mahogany chest is important to the history of British campaign furniture.

We have had earlier examples that have followed the design of domestic chests of the period but were made for travel and chests that have been a halfway house in the evolution of the military chest. However, this is the earliest, dateable campaign chest that we know of that conforms to what became the recognised basic design used by most British makers through the rest of the 19th century and into the 20th. That is to say made in two parts, brass bound with flush handles, no overhanging mouldings etc. and removable feet. Added to this, the chest was also owned by quite an important soldier of the East India Company.

The chest has a number of qualities that mark out its earlier age. The brass strap work is longer at 3 inches to each side and fixed with 6 steel screws when you might expect 4. Each corner of each part also has a brass corner strap and they are also larger in size. The corners to the top of the bottom section have a brass lug to fix the chest to corresponding holes to the corners on the bottom of the top section. There are also straps to the middle of the top and bottom where they meet the back. The edges of the chest are very slightly rounded and the drawer fronts cut with a line mould. The flush drawer and side carrying handles are an earlier shape, as are the decorative escutcheons. The blocks to receive the feet are taller than you would expect. The tops of both sections are finished so that the two halves can be used separately.

The quality is also good with fine dovetails to the ash and oak lined drawers. The steel screws are lined up with this attention to detail a good sign of the standard of cabinet making. This is a considered and well-made campaign chest. We know it wasn't a special commission or one-off piece of furniture as we have seen an identical chest, bar the engraved owner's name, in a private collection. This suggests the workshop produced a number of military chests. There are cabinet maker's pencil initials to the back of some of the drawers with E the most prominent, but we have no clues as to the company.

The large, flush brass carrying handles to the left side of each half are engraved 'Lieut. Col.l Garnham Bengal Army'. The top section is also engraved 19 whilst the bottom is numbered 18.

This is a significant campaign chest, belonging to an officer who counted Raffles as a friend and had a very good career in the East India Company. It is also the earliest brass bound, two-part English military chest that we know of. Circa 1825.


Lieutenant Colonel Garnham
Robert Clement Garnham (1782-1827) led a fascinating life. He became a Cadet in the East India Company in 1797 before being gazetted an Ensign as a 16 year old on the 7th of October 1798. A month later he joined the 14th Bengal Native Infantry. On the 7th of March 1803 he boarded the Lord Nelson to return to England on leave but the ship was captured by La Bellone, a French Privateer, in the Bay of Biscay. He spent the next three years as a prisoner of war before first being paroled in August 1806 and then swapped for three French officers in the November. The year before his parole, the HEIC transferred him to the newly raised 24th Native Artillery. He was promoted to Captain on the 28th of August 1806. The following February he returned to India on the Admiral Gardner, arriving in Calcutta on the 17th of July 1807.

In August and September 1811, he served with the 3rd Bengal Volunteer Battalion during the invasion of Java. The island was a Dutch colony and as Holland had become annexed to the First French Empire the year before, they were at war with Britain. Garnham was held in reserve during the Battle of Meester Cornelis on 26th August 1811 but saw action against the Dutch at Semarang in early September. It was likely Garnham's involvement in the invasion of Java that led to his rise in fortunes. From the 23rd of January to the 23rd of November 1812 he was given civil and military control over Madura island. Then in October of that year he was appointed Resident of Semarang and took up the post on leaving Madura. On the 31st July 1813 he left as Resident to become Stamford Raffles' Political Agent with the states of Borneo to conclude anti-piratical treaties. He was also appointed Honorary aide-de-camp to Raffles. Garnham was part of Raffles inner circle holding several different Resident positions on Java. Aside from those already noted, he became Resident of Besuki and Prabalingga in 1814 and then in September of that year Resident of Yogyakarta, holding the position for a year. He was popular with both Raffles and the Javanese. On the 8th October 1815 Garnham departed for Bengal and transferred to the 2nd Battalion of the 29th Bengal Native Infantry.

With little prospect of service in India he returned to Java on the 13th of March 1816 and took up his former post of Resident of Semarang. Not long after, hearing that Raffles was returning to England, Garnham departed with him on board the Ganges. His 35th birthday was celebrated during voyage and when they stopped at St. Helena, they met with Napoleon. It maybe that he had decided that he needed to marry and that had led to his sudden decision to travel with Raffles for the first thing he did on landing was to propose to his cousin Isabella Mingay Syder. They married on the 3rd of September 1816 and lived at Ashfield Lodge in Suffolk.

On the 14th January 1819 he was promoted to Major and a year later, after a break of three years, Garnham travelled back to India on board the Asia leaving on the 8th of January 1820. He took his wife and daughter with him and his second daughter was born on the voyage. This was a recurring theme in his life with a third daughter and his son also born on board ship between England and India at later dates. Each were given the ship's name as their second or third name. The family returned to England on the 25th of January 1822 and increased in size with the birth of Harriet. They moved to Bath and lived at 20 Somerset Place recently built in the Lansdown area of the city.

On the 1st of May 1822 Garnham was gazetted Lieutenant Colonel and transferred from 33rd Regiment to 27th Bengal Native Infantry. Given his new rank, and the fact that the chest is English, it can be assumed that he bought it between his promotion and return to India in June 1825. Leaving their daughters behind Garnham and his wife set sail on board the Marquis of Wellington. Their son Robert was born during the voyage. Arriving at the beginning of October, the Lieutenant Colonel travelled to Burma to join the 67th Bengal Native Infantry. He fought at Amherst Island during the Burma War on the 2nd of January 1826. He joined the 35th BNI on his return to India.

In 1827, Robert Clement Garnham became ill and was granted sick leave to return to England with his family. They travelled on the Fairle and he died at sea, aged 45, on the 27th of February 1827.

Feet replaced. Various scars & marks as to be expected. Re-polished