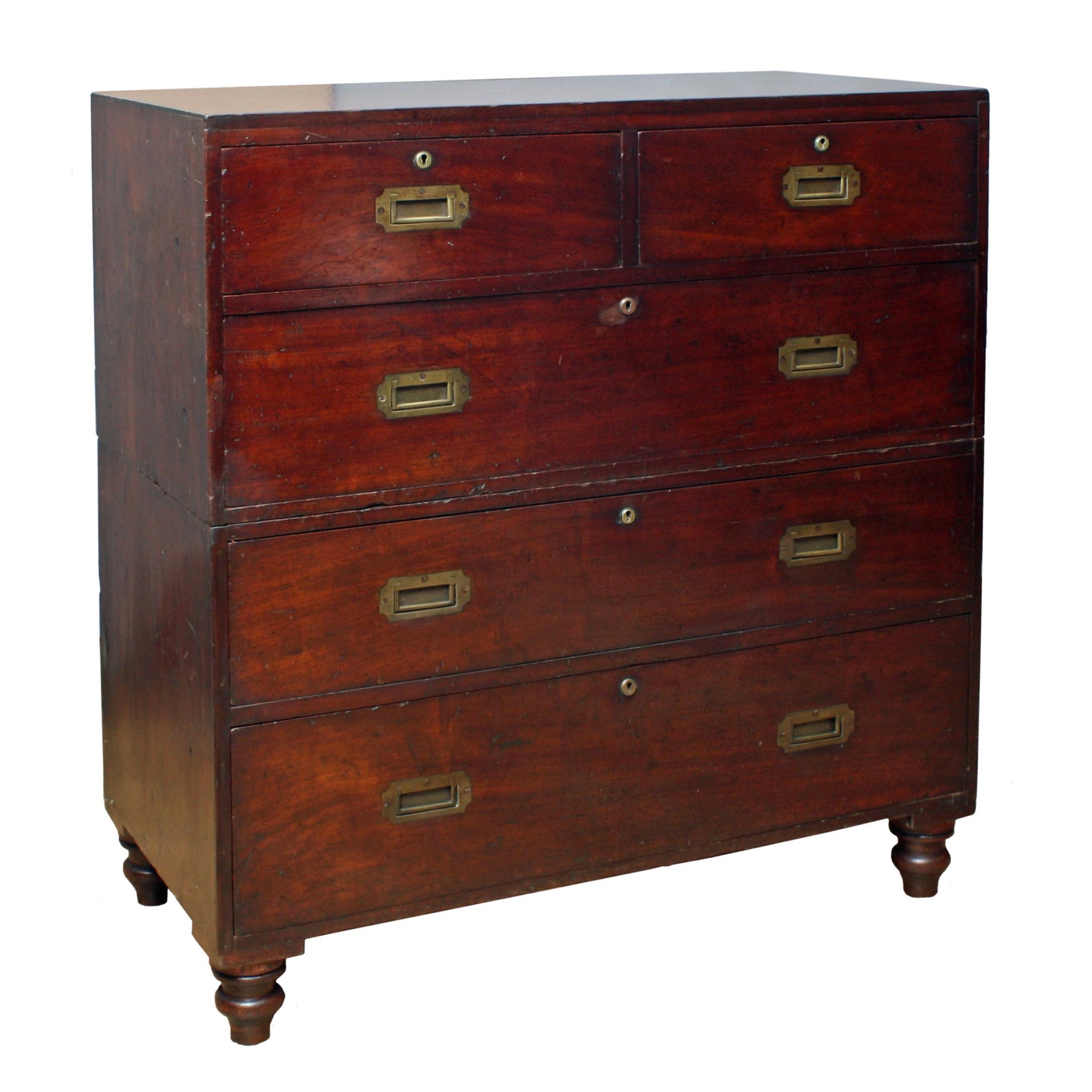 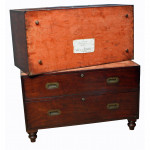 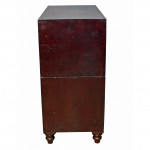 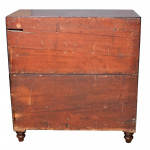 A mahogany Campaign Chest in two parts and with removable feet. The chest was originally fitted with a removable gallery or fiddle, with the brass lined holes to receive the fixing pins still evident. Aside from the fiddle being a sign that the chest was made for Naval use, it also bears a paper label, to the underside of the top section, for E. A Seagrove of The Hard, Portsea who were well known Naval Outfitters.

The label also gives the owner's details of Lieut. Mayow RN, Shortwood, Wells along with a date of 21/2/73. Philip Herbert Wynell Mayow's father was a vicar who lived at Shortwood House in Wells. It was reported on the 18th of February 1873 that he was appointed to the Lord Warden for Special Gunnery Duties and perhaps, as he was to be land based for a while, he purchased the chest to mark his appointment. Mayow was born in 1842 and joined the Navy as a Cadet in 1853, stationed on HMS Imperieuse. By 1861 he was a Midshipman and posted to HMS Coromandel. He passed his Lieutenant's exam the same year and in 1862 was posted to HMS Marlborough before become a full Lieutenant in 1863. Over the next 5 years he was posted to the Archer (where he was acting Commander but returned to England invalided), the Research and the Niger. In 1868 he joined HMS Eclipse as Senior Lieutenant under Captain Anthony Hoskins. He became a Commander in 1876 and 2 years later joined HMS Achilles on Coastguard Service. In 1880 he joined HMS Impregnable and a year later HMS Rifleman. In 1883 he was back on Coastguard service on board HMS Belleisle. 5 years later, still with the Coastguard, he joined HMS Hercules. In 1891 he retired and assumed the rank of Captain. He enjoyed 22 years of retirement in Devon before dying in Exeter in 1913.

Seagrove of 22 & 23 The Hard, Portsea were established in 1795. They were located opposite HM Dockyard and so naturally, their target customers were naval officers. The business was started by William Seagrove, with his son of the same name joining the business in 1844 and the name changing from William Seagrove to Seagrove & Son. Two of his sons, his namesake and Edwin, changed the name to W & E Seagrove on their father's death in 1849. The business then passed to Edwin and his nephew William in 1853 to become E & W Seagrove. On the nephew's death, at the age of 34, the company name changed to E. A. Seagrove in 1866. The name remained the same, even after Edwin's death in 1880, until 1892 when it changed to Seagrove & Co. before becoming Gieve, Matthews & Seagrove Ltd in 1904. Although the company are known to have made brass bound military chests, this version was made without brass strap work. The removable, turned feet are replaced but to the correct design. Although this is a fairly standard looking campaign chest it is elevated by its maker and owner's details. The E. A. Seagrove name to the label, dates the chest to between 1866 and 1892 which ties in with the label date of 1873.

Teak Table Possibly From A Ship

Diorama of the Ship Winnie

The Defender Of The Porte, Crimea Lithograph With 3 Dimensional Face

Half Gill Round Rum or Grog Measure